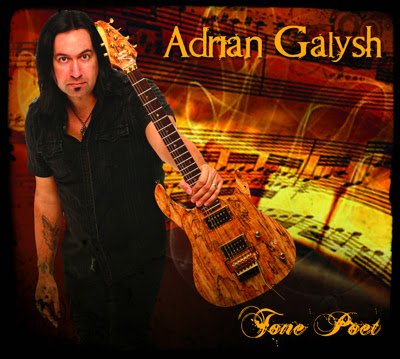 Tone Poet was mixed by Jessie Billson, except tracks 1, 6, and 9 mixed by Adrian Galysh. Mastered by Vinnie Simonette at Little Simy, Alexandria, VA. Posted by Adrian Galysh at 8:16 PM No comments:

If you are like me and many other guitarists, you love playing guitar. You love practicing guitar. However, sometimes your practice sessions may end up being a little.... boring.

While I like keeping my fingers moving, on occasion I find myself, and my students, falling into a rut, practicing the same routines, scales, songs, etc., and not progressing, musically. So I recently set out to put together a series of lesson videos containing ideas that will take you out of your rut, and help you take your playing to the next level.

You can always visit my Youtube channel at http://www.youtube.com/adriangalysh for all my various video lessons and performance videos, but I wanted to put all my "Rut Buster" videos in one convenient spot for you...


5. "Playing With Other Musicians"


9. "The Scale That Will Change Your Life"


Keep an eye out here for more in my series of Rut Busters for Guitarists videos...