I have been writing a guitar instructional book, called, "Progressive Warm-ups and Exercises". It presents both beginning and advanced guitarists with a progressive series of strength, dexterity, finger independence, and left & right hand coordination exercises that can be used before any practice, recording, or performance session. 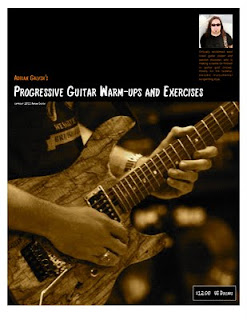 Unlike other exercise books that tend to overwhelm the reader, and may repeat scale material found in many other publications, these warm-ups, developed, collected, and used by me in my 18 years of teaching, deliver a concise routine, with no filler, and gives the reader maximum results in minimum time. Whether the guitarist has just 2 minutes or 30 minutes, these 25 progressive exercises will give them the improved strength and coordination they require.

Posted by Adrian Galysh at 12:31 AM No comments:

It was bound to happen.

Two weeks ago, I played in San Diego, opened for Alcatrazz featuring Graham Bonnet. The venue was large, and a good amount of people filled the 1400 seater. I have had pretty good luck, gigging at venues with decent management and staff for over 15 years. The bad news about this gig? The owner decided, contrary to the contract he signed and agreed to uphold, that I, nor my band would get water, food, towels, a guest list, nor the total money/payment we agreed to. After a frustrating long drive, no lunch, and a late dinner (after finding out we wouldn't be fed, and grabbing a couple slices of pizza across the street), we did end up having a GREAT performance.

Essentially, I KNEW that I was in a bad mood, distracted, and frustrated with the venue. I made a commitment right before playing the first note of the set, to make my performance a memorable one. There were many moments, one in each tune, where some musical inspiration and the occasional transcendence occurred. The energy was great on stage and off. I guess the audience felt the same way, because after the performance, I was greeted with compliments and praise by audience member after audience member... after which I sold a lot of merchandise (CDs & T Shirts)... from what I gather, more than Alcatrazz sold. I felt vindicated as the club's sound man showered a ton of compliments on the band and I. Very flattering. The moral of the story, was that every performance should one where the band and I play like we have "something to prove". Focusing on putting on an inspired performance translated to the audience and ultimately to merch sales and a healthy addition to my mailing list.

Woops, also, having a great supportive band made up of friends always helps - thanks Maureen Baker, Charlie Waymire, and Mike Talanca!

Posted by Adrian Galysh at 6:35 PM No comments: