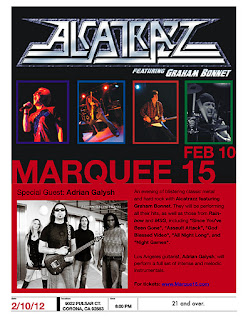 Alcatrazz featuring Graham Bonnet will be performing all their hits, as well as those from Rainbow and MSG,
including "Since You’ve Been Gone", “Assault Attack”, "God Blessed Video", "All Night Long", and "Night Games". Graham Bonnet was recently a guest on VH1 Classic’s popular program, “That Metal Show”, and he and the band have just returned from a successful tour of Europe, sharing the stage with hard rock heavy weight, Whitesnake. Alcatrazz are now ready to imprison California's inland empire.

Special guest, Los Angeles guitarist, Adrian Galysh, will perform a full set of intense and melodic instrumentals. Called “A virtuoso of modern electric and acoustic guitar techniques” by 20th Century Guitar magazine, Galysh has been dazzling southern California audiences for over a decade, whether he’s backed by his band or as sideman for ex-Scorpions guitar legend, Uli Jon Roth.

After a 2011 show that saw these two artists teamed together, Graham said to Adrian, “I had to come side of stage when you played, and my bass player found me there watching. He mentioned he has never seen me do this, which is true, I usually don't like even being in the venue before going on stage....you were the only guy that was worth watching as I had never seen you play before...I was beyond impressed”. Considering the guitar talent that Graham Bonnet has worked with, which includes legends like Ritchie Blackmoore, Michael Schenker, Yngwie Malmsteen, and Steve Vai, that says a lot.