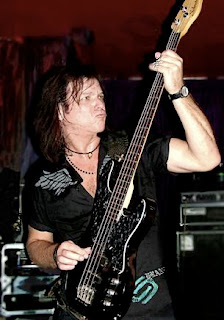 Chuck Wright is best known as the bassist of heavy metal band Quiet Riot. He originally joined Quiet Riot in 1982, performing bass on several tracks for their hit album, Metal Health, as well as contributing backing vocals. He left and rejoined Quiet Riot multiple times, most recently rejoining in August 2006 to support the album Rehab and continued touring with Quiet Riot until the untimely passing of lead singer Kevin DuBrow in October of 2007. Chuck started back touring with Quiet Riot's Frankie Banali and Alex Grossi again in the fall of 2010. He is still an in demand session player and also performs live in various Rock acts as well as with modern flamenco guitarist David Maldonado.


Chuck's career in mainstream heavy metal first took off with his band Giuffria's hit "Call To The Heart" in early 1985. After sold out arena tours with Deep Purple then Foreigner, he left Giuffria to re-join Quiet Riot. His reputation as one of the most accomplished bass players later landed him working with such music icons as Alice Cooper, Gene Simmons, Slash, Gregg Allman, Carmine Appice, Ronnie Montrose, John Waite, and Pat Travers.


I met Chuck in 2001, when I had completed recording my second CD, "King Friday". The CD replicator suggested Chuck as a graphic artist for the project, and as I was already familiar with Chuck's bass playing, and being a fan of Quiet Riot, I was excited to have him involved with my CD. Chuck's creative sense of design, and an eye (and ear) for detail, is evident on the cover art for "King Friday" as well as my most recent CD, "Earth Tones". Chuck is a great interpreter, and whether he is playing bass or working on graphic design, his approach comes across as very natural. 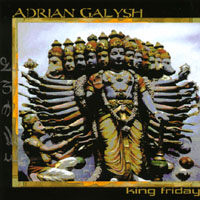 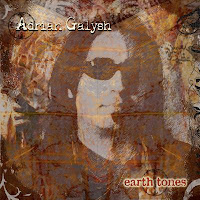 Chuck played fretless bass on "Planetary Cycles", a track on my album, Earth Tones. I also had the pleasure of having Chuck in my band for a short west coast tour, called "Shredstock" with fellow guitar blazers, Steve Smyth (Testament, Forbidden) and Doug Doppler. Besides holding down the fort on stage, Chuck is a great help on the road, and an easy going guy, which is always a plus on the road (especially in a van!). I recently caught up with Chuck, and below is an exclusive interview for my blog, "Putting Words To Music":


Adrian Galysh: When did you start playing bass? How old were you?

Chuck Wright: When I was around 8, my Mom had me take classical guitar lessons and I had one of those electric organs where you play melody with the right hand and press a button to make the chord with your left. The first song I ever learned on that was “House Of the Rising Sun’” by the Animals. Now, whenever I hear that song, it takes me right back to those days. I didn’t really stick to the guitar that much though.

AG: Do you remember what prompted you to pick up the instrument?

CW: The older kids in my neighborhood (16 & 17) had a band. They talked to me because I was tall for my age at 14, probably thinking I was older and said, “hey Chucky, you play guitar a little right? Do you think you can play Bass?” I said “hmmm..isn’t that just four strings..ok, let me ask my Mom if she’ll get me a Bass and an amp." She said yes, I got a cool black tuck and roll Kustom Bass amp and a 62 P-Bass but I returned it to get a Gibson EBO Bass like my favorite bassist, Cream's Jack Bruce, plus the P-Bass neck was way to big for my hands. I regret that now. I did my first gig with these guys, which was a UCLA fraternity party. I made 75 bucks, had my first beer and the girls seemed to like me so I went to my mom and said “I don’t want to be in military school any longer, I want to be a musician." After 9 years of military school I was surprised she said yes. If I had a father around, that might have been different story.  One of my fondest moments is giving my mom a platinum record with her name on it for my work with Quiet Riot. Side note: I actually got to play Jack Bruce’s EB-O at a collectors home!

AG: Did you take lessons?

CW: I’m totally self-taught. I’ve always played from what I feel. I never wanted to play like someone else’s idea of how to play.  My classrooms were the Hollywood clubs seeing great bands like Mahavishnu Orchestra, Yes, ELP, and Genesis. I was really into progressive rock bands during my high school years. Killer musicianship. Later I got into Jazz-fusion but Hard Rock pulled back in because of my reputation with Quiet Riot, my band House Of Lords and other rock records I played on. Funny thing is, most people don’t know I played bass and co-produced two reggae records and two ambient trance records. I also did some r&b and rap too.

AG: What’s your philosophy or approach toward the role your instrument plays in a band performance?

CW: I always create bass parts based on the kick drum pattern, chord changes and the vocal melody. I try to complement the vocal and guitar parts with my passing notes.

CW: Led Zeppelin, The Beatles, Pink Floyd, Weather Report and Bill Brufords band on “One Of A Kind”. 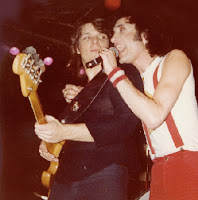 AG: And who are your absolute favorite bass players?

CW: My favorite Bass players names all start with the letter "J" - John Paul Jones, John Entwhistle, Jack Bruce, Jaco Pastorious, but Paul McCartney is a favorite of mine...wait, his first name is John too!

AG: Interesting. I really can hear those influences in your playing, now that I think about it. Are there any artists have you been digging and listening to currently?

CW: I don’t really care for the new acts that I hear these days. It seems contrived and not real to me. It's now all Pro Tools and not just playing the song together. The only relatively new bands I dig are The Foo Fighters, I also appreciate Adelle’s music. I prefer class, production quality and real playing. Jeff Beck anyone?

AG: I love Jeff Beck. I think most guitarists do, however its interesting to hear a bassist sighting Jeff Beck. Chuck, if you couldn't play bass for a living, what do you think you would be doing?

CW: Graphic design. It’s a sideline for me now and has been since 1993. I’ve done over 100 CD packages, many logo designs, and tour shirts, on and on. I did a couple for you Adrian, as I recall. (Yup! 2 CDs, a T-Shirt, and sticker design - Adrian)

For acoustic gigs:
I use my Godin fretless Bass, flat wound strings, an Ampeg BA-115 slant Cab, a Boss CE-2 Chorus pedal and a Boss Tuner.


AG: Most people have a “Spinal Tap” moment in their careers, any strange or funny road stories?

CW: My favorite "Spinal Tap" story is when I was touring with Alice Cooper. There’s a part of the show where he is taken to a guillotine and at this show, the executioner yelled “die!” and let the rope go, the blade fell but stopped half way down, yet Alice’s head still fell off.  We all cracked up and they rushed the guillotine off the stage. He also got stuck in a smoke filled pod just like in Spinal Tap. No kidding.

AG: Can you share a career highlight?  What made it so special?

CW: Being on the stage with Quiet Riot in 2007 in front of 45,000 screaming people and seeing Kevin looking back at me with that “yea, we still got it look”, sadly he died later that year. We had a great year and we were back!


AG: You have played with many great drummers in your career, from Frankie Banali in Quiet Riot, Mr. Big's Pat Torpey, Gregg Bisonette, Tony Royster Jr., Kiss's Eric Singer to my band's very own bad-ass, Glen Sobel. In your opinion what makes for a great rhythm section? What do you like in a drummer?

CW: I always say, I'm only as good as the drummer I'm working with and I've been very blessed in that regard. What makes it great is the connectivity. With certain drummers I have a sixth sense as to what they’re going to play so we’re a lock throughout and I can catch their spontaneous drum fills. I once challenged the legendary Carmine Appice to try and lose me with drum riffs and I matched him lick for lick as if I was in his head. I love to play drums and I know that helps a lot. I just feel the drums first, even before bass.
Bottom line is, it's all about feel.

AG: What projects are you currently working on, and what or where can we expect to hear from you in the near future? 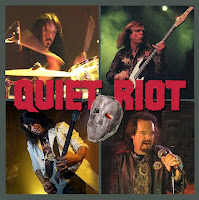 CW: I’m on the road most weekends with Quiet Riot. After a three year hiatus after Kevin’s passing we found a voice that could deliver the material and started back a year ago. Hopefully we’ll record some new music this year. I’m always writing and often with that in mind. In the first week of 2012 I recorded 10 songs at Gilby Clarke's studio for a Swedish Rock guitarist/ singer named Marc Ferano. I’m currently writing and recording with Heaven and Earth. I played bass on their first album and did their art work on their second release. It features members of the Sweet. I also put together a very cool acoustic trio called Acoustic Saints. We reinterpret classic rock tunes and do a few originals with more in our future. We have violin, mandolin and I play my Godin Fretless Bass.

Find out more about Chuck Wright and the artists he is working with below: