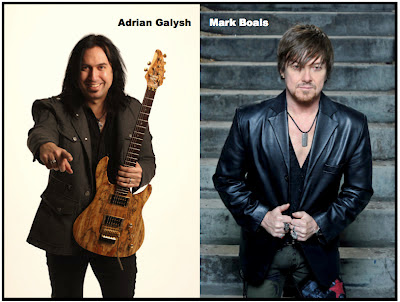 Described as “A virtuoso of modern electric and acoustic guitar techniques” by 20th Century Guitar magazine, Galysh has been dazzling southern California audiences for over a decade, whether he’s backed by his band or as sideman for ex-Scorpions guitar legend, Uli Jon Roth.
Boals, whose career started with stints in Savoy Brown and Ted Nugent, is noted most for his vocal work with neoclassical guitar virtuoso, Yngwie Malmsteen, appearing on four studio albums, including the hard rock classic, Trilogy.
Galysh and Boals have worked together before, performing in ex-Scorpions guitarist, Uli Jon Roth’s band during a 2011 tour. Galysh says of the opportunity to write and record with Boals, “Mark Boals is one of my all-time favorite singers. I clearly remember first hearing him on Yngwie’s Trilogy album, and being blown away by how strong and unique his voice was. I’ve been fortunate to have been able to perform with both my favorite guitarist, Uli Jon Roth, as well as favorite vocalist, Mark Boals, and am thrilled to have him on my new record.”
The new album, tentatively titled, “Tone Poet”,  is expected to be released in summer 2012. For updates and information, please visit www.AdrianGalysh.com