Most music fans may know of Todd Sucherman from seeing him play drums on tour with 70s & 80s rock giants, Styx, for the last 17 years. The perennial arena rock favorites perform a healthy schedule of over 150 shows a year. Drummers know of Todd Sucherman from the pages and covers of DRUM! and Modern Drummer Magazine, where he's won multiple reader's poll awards, including #1 Rock Drummer (2009 Modern Drummer).

I’ve known Todd for about 10 years. We were neighbors in Los Angeles before he moved to Austin, Texas. We’ve discussed working together for a long time, but due to his busy tour schedule and the distance (I still live in LA), we weren’t able to do it till now. Todd is a really tasteful drummer, very musical, with a ton of chops - totally in league with the likes of Colaiuta, Smith, and Bozzio. His performance on my new album, Tone Poet, is outstanding, and really shows off a side of his playing that people may not have heard yet. Every time I listen to the his tracks on Tone Poet I hear something new, clever, and musical - and I love that. (note: Tone Poet is available on itunes here) Below is a recent interview I did with Todd, where I was able to get better insight into what made him the player his is today, as well as discuss his approach to tracking for Tone Poet.

Hi Todd, I assume you are on tour, how are you and where are you?

I am and I'm good.  A little crispy perhaps but good!  I'm on the Oregon coast at the moment but I've been to Europe twice and everywhere in the US from coast to coast in the last few weeks.

Lets start at the beginning. Your father was a jazz drummer, and got you into drumming, as well. What’s your earliest memory of playing the drums, or wanting to play drums?

I was in love with the drums since I was an infant. It's all I ever wanted to do from the beginning.  My father saw that I had an interest and a sense of rhythm early on so he worked with me and got me to the point where I played my first gig (with my older brothers) at age six.

You got started early! Did you ever take lessons, as a kid?

Yes, starting with my father and because I had two older brothers in the junior high band  (on piano and bass guitar respectively) they paved the way for me to be in the junior high band from first grade on all the way through eighth grade.  Then I went through the high school band program all the while gigging on weekends and really didn't take any proper lessons until I went to Berklee in Boston for one year.

Before scoring the gig with STYX, what kind of work and gigging were you doing in Chicago?

When I got back from Berklee I did every gig possible. You name it.  I played tons of weddings and corporate parties, jazz clubs, rock clubs, basically anything and everything I could do. This lead to getting into the recording scene and doing records and a lot of jingles.  Chicago was a giant jingle town back then and that was a very exciting time. I was young and had kits being carted all over the city to different studios.  Those were great times.

That leads me to my next question. You got called to record for Styx when John Panozzo fell ill. Typically musicians get gigs by “knowing somebody”... who’d you know, and do you remember how it felt to get the call to become a “permanent” member of Styx?

Keith Marks, who handled the cartage of my gear from studio sessions recommended me to the guys. That's how it began basically.  Just a session. Then they called me for another session almost a year later. Then they asked me if I had summer plans, and that was for the '96 reunion tour.  I've never been made a "member", I've just sort of hung around for the last 17 years, so to speak!

Styx seems to tour non-stop. Do you still get inspired to practice when you are on a day off or at home? If so, what kind of stuff do you work on?

It helps to have new things and projects to practice for…as opposed to just being alone and thinking, "what shall I do today?" But it does feel good to sit at my little jazz kit and work on different things instead of playing high velocity rock stuff.  I try to let any inspiration hit me which is different than forcing things. If I get "stuck' I'll change some cymbals and grab a different snare drum, that will change the vibe right away.

Lets talk about your participation in my album, TONE POET. The first tracks I sent you were pretty rough. I’m pretty non-committal, and my demos will tend to be the framework of the song, with programmed drums, scratch guitars (except some solos), and a shit load of keyboard programming. What was your reaction when you first heard the tunes?

I'm used to hearing demos in all forms, from rough sketches to almost all final takes.  But I could hear a lot of cool things in what you sent and was keen to add some ideas to the process. I start thinking right away as I listen, then just listen, then think again.  There were some challenging bits musically and physically all the way to having to be ethereal and sensitive.  Music. Diversity.  It was a lot of fun to do! 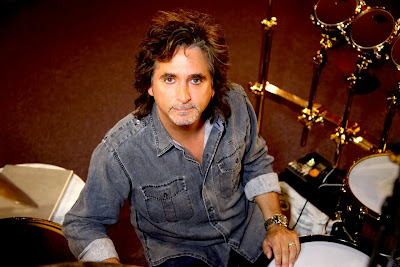 You did a lot of listening to these demos while on the road. You had one day to record 5 tracks, and they turned out great. How did you prepare for this session? Do you chart things out?

It was exactly that.  Listen on the road, listen on airplanes, and then it's time to see if what I was hearing from the drums worked in the session, which was in fact done in one day.  I'm happy you liked them!

Were any musical parts or songs particularly challenging?

"Echoes of El Greco" was physically taxing.  I'm glad that went down quickly as that's the kind of track that will blow you out doing it over and over and over.

The track “Ur of the Chaldees” has a lot of layers and multiple tracks of percussion, drum set, and orchestral type playing, did you have a clear idea of how those parts were going to go down, or did you go for it and see what fits?

Part of it was predicated on some information from the original demo, and then I went from there. I have a few percussion bits I like to do that are subtle and effective.  I enjoy trying those ideas and seeing what works and what doesn't.  I love when the full kit kicks in for the end ride out. The whole piece is very majestic.  Like taking acid while riding an elephant through an exotic triumphant parade. How's that, huh?

I'll have to use that quote in the press release, ha! Now that the album is mixed and mastered, is there a favorite track?

No, because there are moments I enjoy on each track.  I like it that way.  I like when I feel that way about a collection of songs.

Can you run through the drums, cymbals, and other gear you used for this session?

Oh man. I used a Pearl Masterworks kit for the drums with a few snare drums, probably 5 different ones.  I seem to remember using a Dunnett Magnesium, a Tempus drum made of hemp, the Sucherman/Stanbridge Empyrean, perhaps the Dunnett Titanium.  There were a whole bunch of Sabian cymbals chosen for each track so that would be impossible to remember. All the microphones were Audix going through Presonus ADL 600, Neve and Focusrite mic pres.

So besides further touring with STYX, what is on the horizon for you musically?

Good question as I'm not sure.  "You're catching me in a transitional phase" so to speak!  I have some ideas and notions but not sure where they will lead.  I'm still enjoying playing with the band for now, so I'm quite content.  I'd like to do my own record at some point but we'll see. There's a lot involved with that, as you know.