Los Angeles, California - Guitarist, Adrian Galysh, has enlisted Styx stickman, Todd Sucherman, to contribute drums and percussion to his new record, “Tone Poet”.  Todd Sucherman brings to the record both world-class drumming and vast experience. Experience which includes session credits for over 1000 radio and TV spots, as well as  touring and recording with legendary artists such as Brian Wilson, Spinal Tap, and of course, Styx. 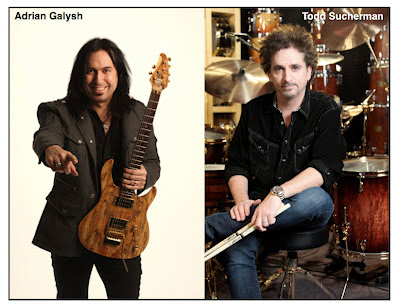 Galysh, described as “A virtuoso of modern electric and acoustic guitar techniques” by 20th Century Guitar magazine, has been dazzling California audiences for over a decade, whether he’s backed by his band or as sideman for ex-Scorpions guitar legend, Uli Jon Roth.
“Tone Poet” is Galysh’s fourth solo album, but will be the first to include both instrumentals as well as a number of vocal tracks, ably sung by Mark Boals (Yngwie Malmsteen, Royal Hunt).
With “Tone Poet”, Galysh’s tasteful guitar work and compositional style are still front and center, but will now have one of the industry’s most respected drummers laying down the grooves. So respected that 2012 saw Todd Sucherman win multiple categories in DRUM! Magazine’s reader’s poll, including  #1 DVD (Methods and Mechanics II), #1 Clinician, #2 Rock Drummer, #2 Book (Methods and Mechanics Transcription Book).

In addition, Modern Drummer’s 2012 reader’s poll clocked him in at  #2 DVD (Methods and Mechanics II), #3 Prog Drummer, ranking next to Neil Peart and Mike Mangini!
An exciting year for sure, and a great follow up to 2009 which saw Todd Sucherman on the cover of Modern Drummer, and winning the reader's poll for #1 Rock Drummer, #1 Educational DVD with "Methods and Mechanics" as well as #1 Clinician in DRUM! Magazine - all while touring the world with the multi-platinum Styx and performing drum clinics and recording sessions from coast to coast.
According to Adrian, “I’ve known Todd for about 10 years. We were neighbors in Los Angeles before he moved to Texas. We’ve discussed working together for a long time, but due to his busy tour schedule and the distance (I still live in LA), we weren’t able to do it till now. Todd is a really tasteful drummer, very musical, with a ton of chops - totally in league with the likes of Colaiuta, Smith, and Bozzio.” 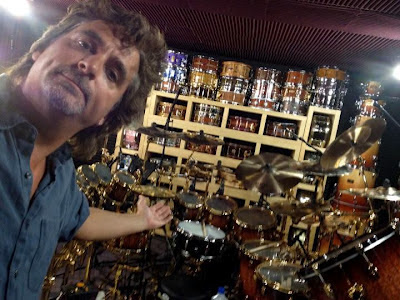 Galysh continues, “Tone Poet is my most mature album. I’ve written a very melodic, musical, collection of tunes, that includes my progressive hard rock influences, classical and world-music influences. Todd’s playing is right in sync with where I am at, musically.”
For more information, please visit www.AdrianGalysh.com